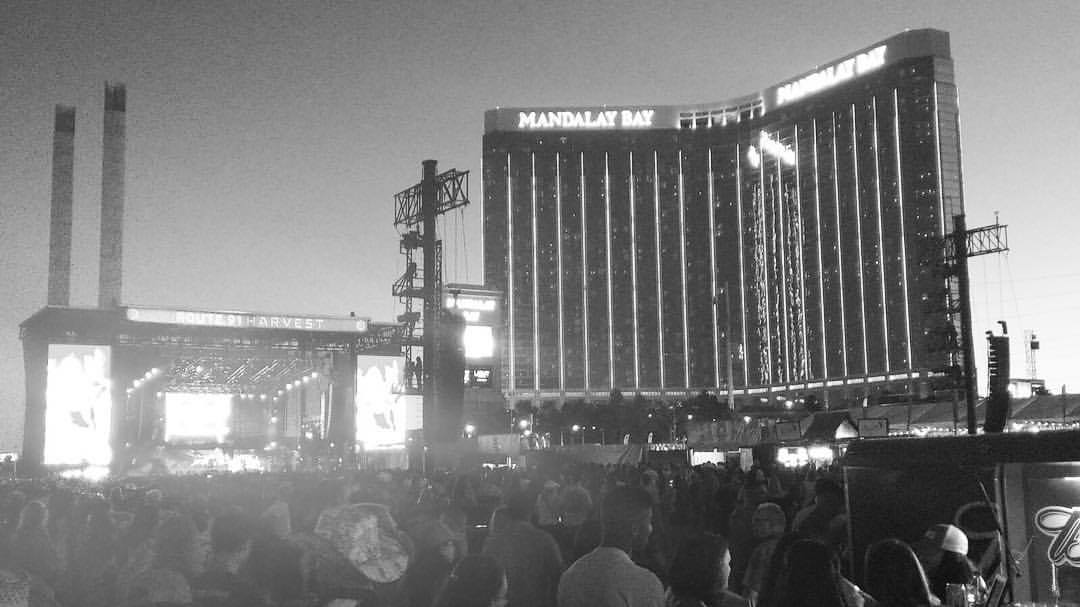 So, I’ve been M.I.A. the past couple of weeks and here’s why.

You know that out of town trip I talked about a couple posts back? Well, I went to Vegas.

Sunday night, I was standing on the left side of the stage with my friends and my sister, listening to Jason Aldean sing, when suddenly we heard what we thought were “firecrackers”.

At first, I thought it was a prank. Some idiot who had brought fireworks into the venue to scare everyone. It soon turned into one of the worst nights in my life.

As we stood in confusion, a group of people to our right began spreading out to reveal a girl who had been shot lying on the floor. Even when the automatic rifle began firing, my mind couldn’t process what was happening. There couldn’t be someone shooting at us. There had to be another explanation.

A guy next to me began yelling, “We need to go!” and I looked for my friends and my sister. When I saw they were running away, I got up and ran as the next round of shots started.

I realized I was separated from my group and I was terrified. So, I called the one person I always called when bad things happened. My ex husband. The man who used to be “my person”.

But as soon as he answered the phone. I UNLEASHED.

I put every ounce of energy, fear, and pain into yelling at him.

“You should have been here, but you left me”

“You should have been here to protect me, where are you?”

“You were too much of a coward to face your problems, so you abandoned your family.”

Weeks later, I still don’t remember every minute. Just the faces. Frightened, panicked, and crying faces. Strangers, who thought they were going to die. Some ran into buildings, others hid under cars or behind buildings. All trying desperately to run away.

What seemed like moments later, I came to a dead end with a large group of people. We were trapped by two chain-linked fences. Two girls standing by the gate turned towards me and I immediately saw the blood covering their shirts. One of the girls had been hit by either a bullet, or shrapnel, and was bleeding from her stomach. Without thinking, I took the shirt from around her friend’s waist and applied pressure. I looked frantically around for a way out. A way to help this girl get to a hospital. Luckily, a man and his girlfriend had a truck nearby that we used to tear down the chain-linked fence blocking our escape.

Hours later, I was reconnected with my group of friends and was so relieved none of them were hurt. We were EXTREMELY lucky. While we all knew people who were injured, shot, or killed, we got out with only bruises and scratches. But many that night were not so lucky. Many saw unimaginable horrors that will forever haunt their reality. I have been to a couple of debriefings with others who were at the concert and we all wear a haunted, distant look. A silent understanding of a battle that continues beyond media headlines.

A battle of the mind.

The horrors of that night will remain ingrained in my being. This year, I have witnessed first-hand the depths of human depravity and brokenness. Between my ex’s betrayal, his callous disregard for our son’s pain, and the terrors of Route 91, hope can seem distant.

But let me tell you what else I saw in Vegas.

I saw the absolute best of humanity.

There was no race, no gender, no sexual orientation, no religious or political affiliation, but the height of human kindness. How stunningly, beautiful it was to see strangers joining together in a unified selfless voice declaring, “You are not alone.” Without promises, rewards, or praise, strangers held hands as bullets flied. Strangers helped each other over fences and through darkness. Strangers held each other as they cried together in their grief.

How amazingly, beautiful it was to see so much light in the midst of so much darkness.

God did not forsake us in Vegas.

Without God… kindness, love and compassion are meaningless.

I couldn’t attempt to explain why this happened, or why innocent people lost their lives. But I do know hope is not lost. The light of Las Vegas glittered that night, but human kindness burned brightest.